Located just 50 miles southwest of St.Maarten is the volcanic island of Saba. Although this little island is only five square miles it rises to an amazing height of about 3,100 feet, making it the highest elevation in all of the Netherlands Kingdom. The entire island is steep and you will not find a flat road or sandy beach. But the views are just breathtaking!

The best way to see this island is to take a tour and hike. So we hopped a cab and headed up the steep island to The Bottom, the island’s capital.

Looking down to see the airport runway.

However, the most spectacular views on the island have to be earned by climbing to the top of Mt.Scenery. The hike includes 1,064 steps and then climbing over some large boulders.  The climb feels like you are in a fairy tale as you ascend into the clouds/mist, when a cloud passes under you get the sensation that you are walking on clouds.

Pictures from around the town called The Windwardside:

Clogs of the Netherlands

All buildings on Saba must have a red roof per the law.

We ended our island tour with some sundowners and a nice sunset back on Smitty.

The factory 20 gallon water heater was rusting out and leaking.

To remove the tank there were a couple of obstacles. The factory had the aluminum L bracket on the port side of the heater. But the starboard side was in a slot cut in the fiberglass that makes up the shelf the refer compressor sits on. So we started with removing the L bracket and the pressure relief valve. It then took 3 people to move it over to port enough to get the bracket out of the slot. Then I had to cut some of the fiberglass from the opening. We were able to turn the heater and get it out but it took a fair amount of effort.

Once the heater was out it was easy to put the 6-gallon heater in its place. It was shorter and narrower. We used the same L bracket on the port side. Then secured the starboard side down on the platform that was made for the heater.

This left an approximately 10-inch wide area between the back of the water heater and the fiberglass shelf for compressor. We did some searching at a couple of local chandleries and found a 6 gallon water tank that was 8 inches wide and the same height as the water heater. We secured the tank down with padeyes and nylon straps. 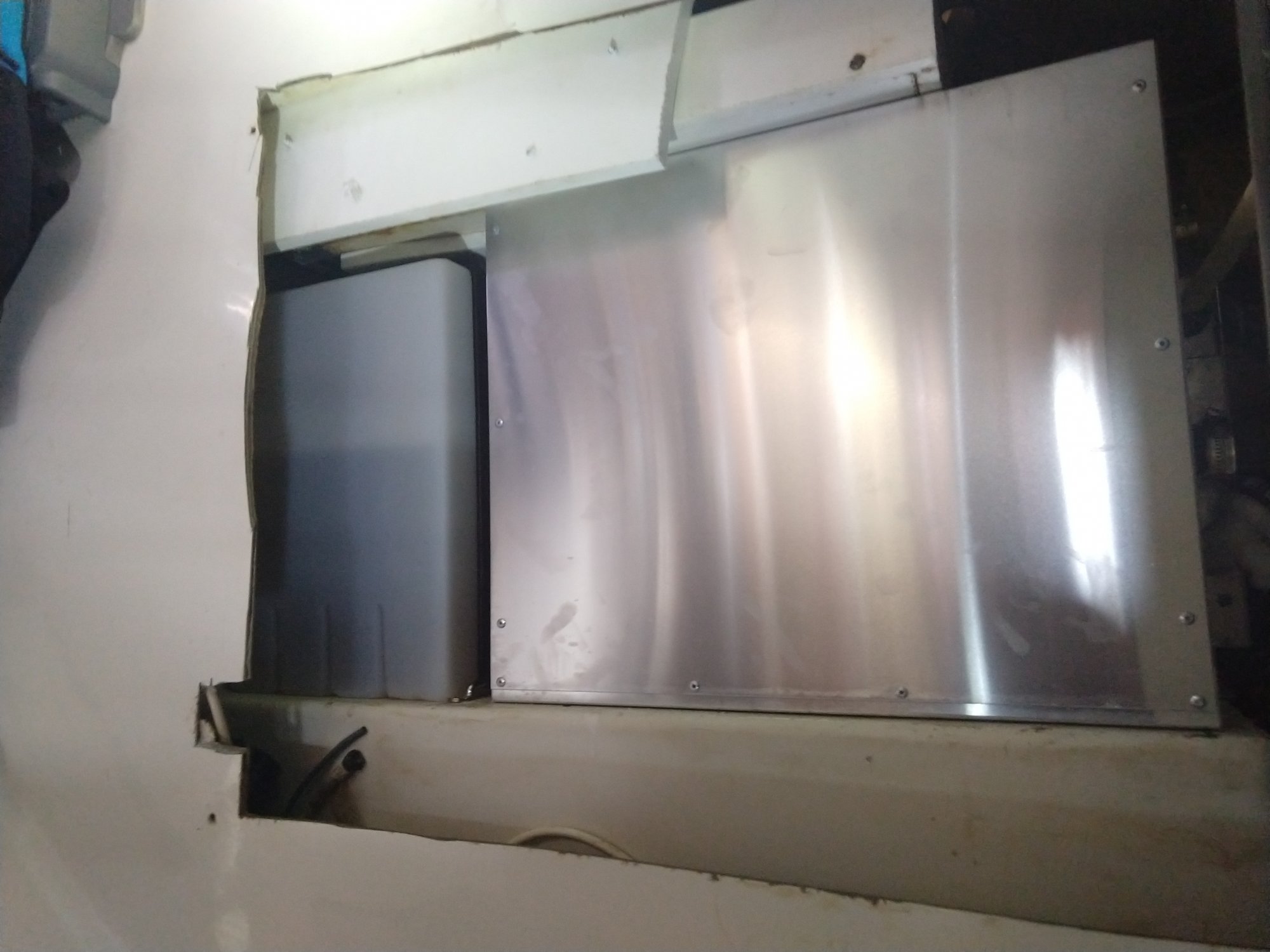 I plumbed the tank to a small, 1 gallon per minute, 12 volt pump that I mounted on the shelf next to the compressor. 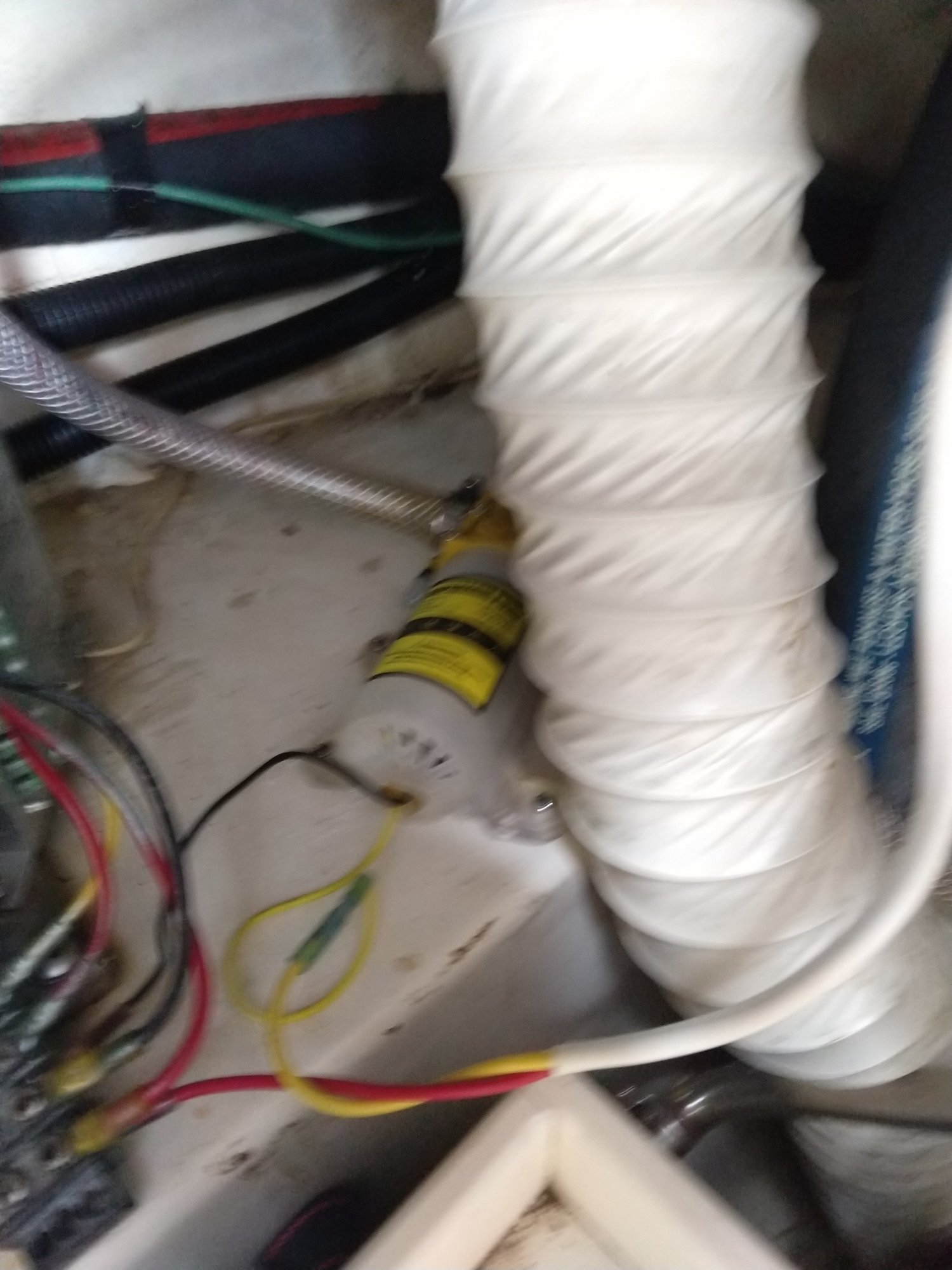 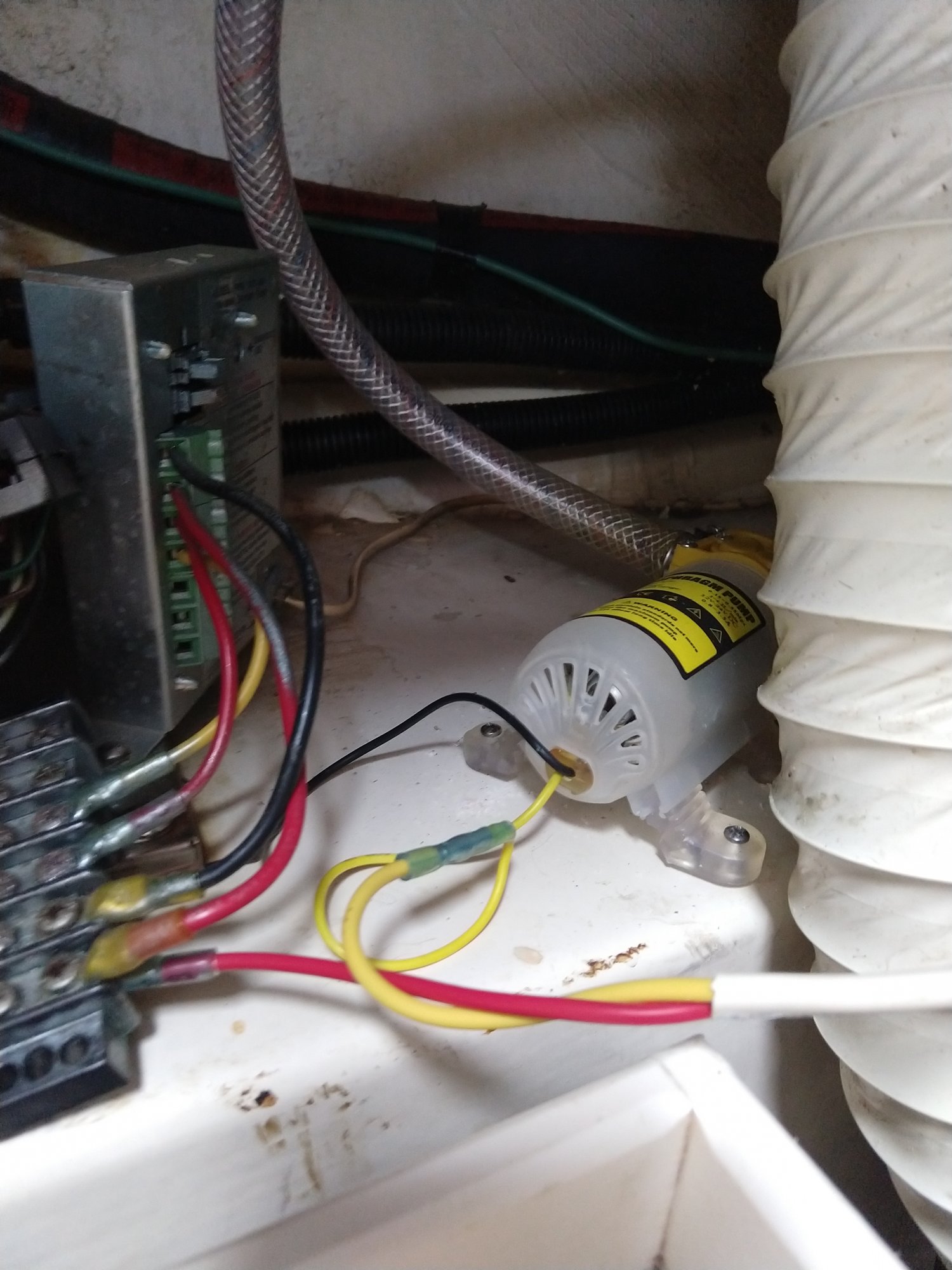 The fill for the tank is just capped off in the starboard rear laz for now. I have the tank vent and effluent hose from the pump loosely installed for now at the opening of that laz, just above the cockpit shower head. Both are capped when not filling a use bottle, the Angels already got their share they don’t get seconds. The pump is controlled by a momentary switch that is also mounted by the cockpit shower. 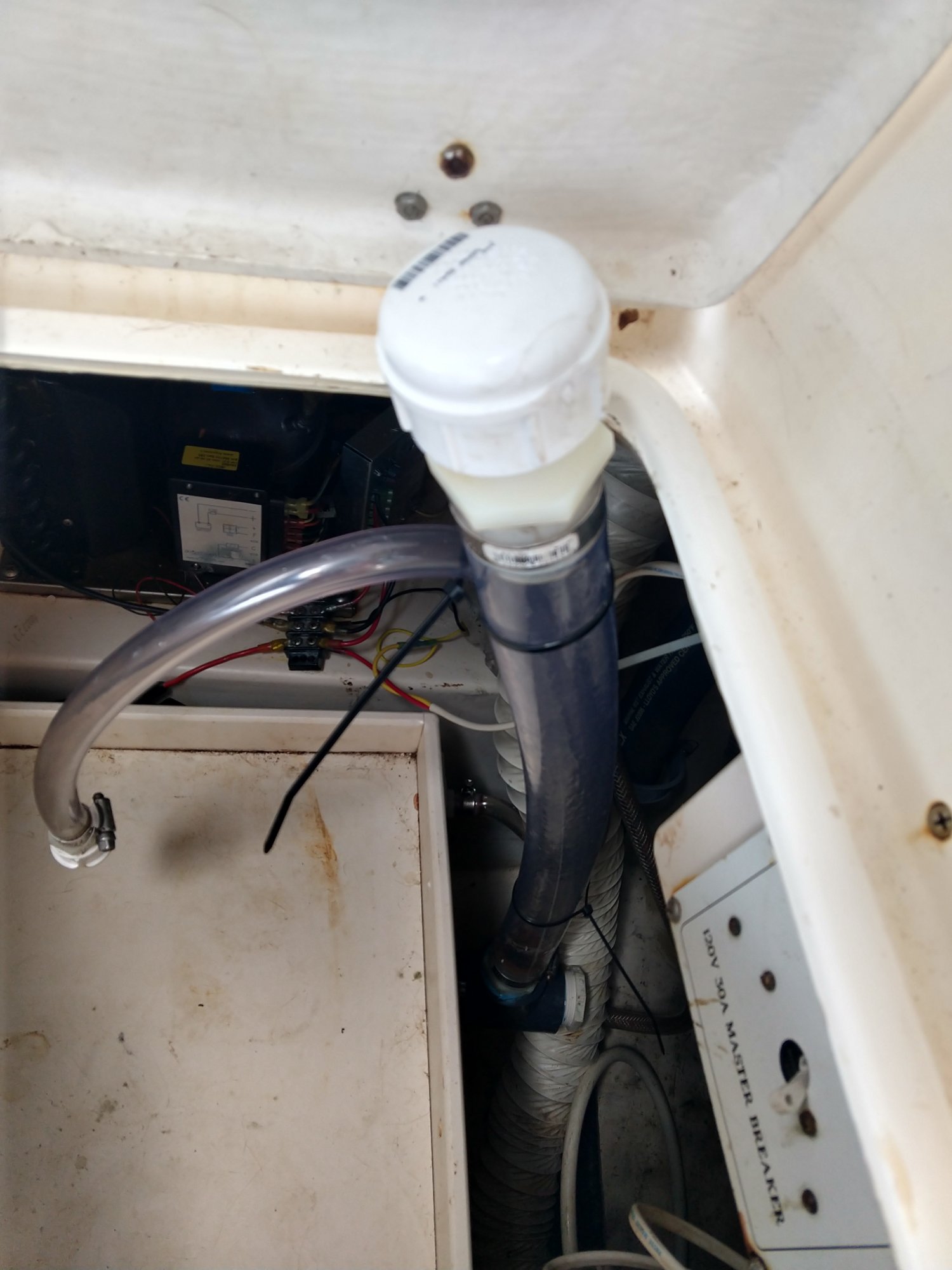 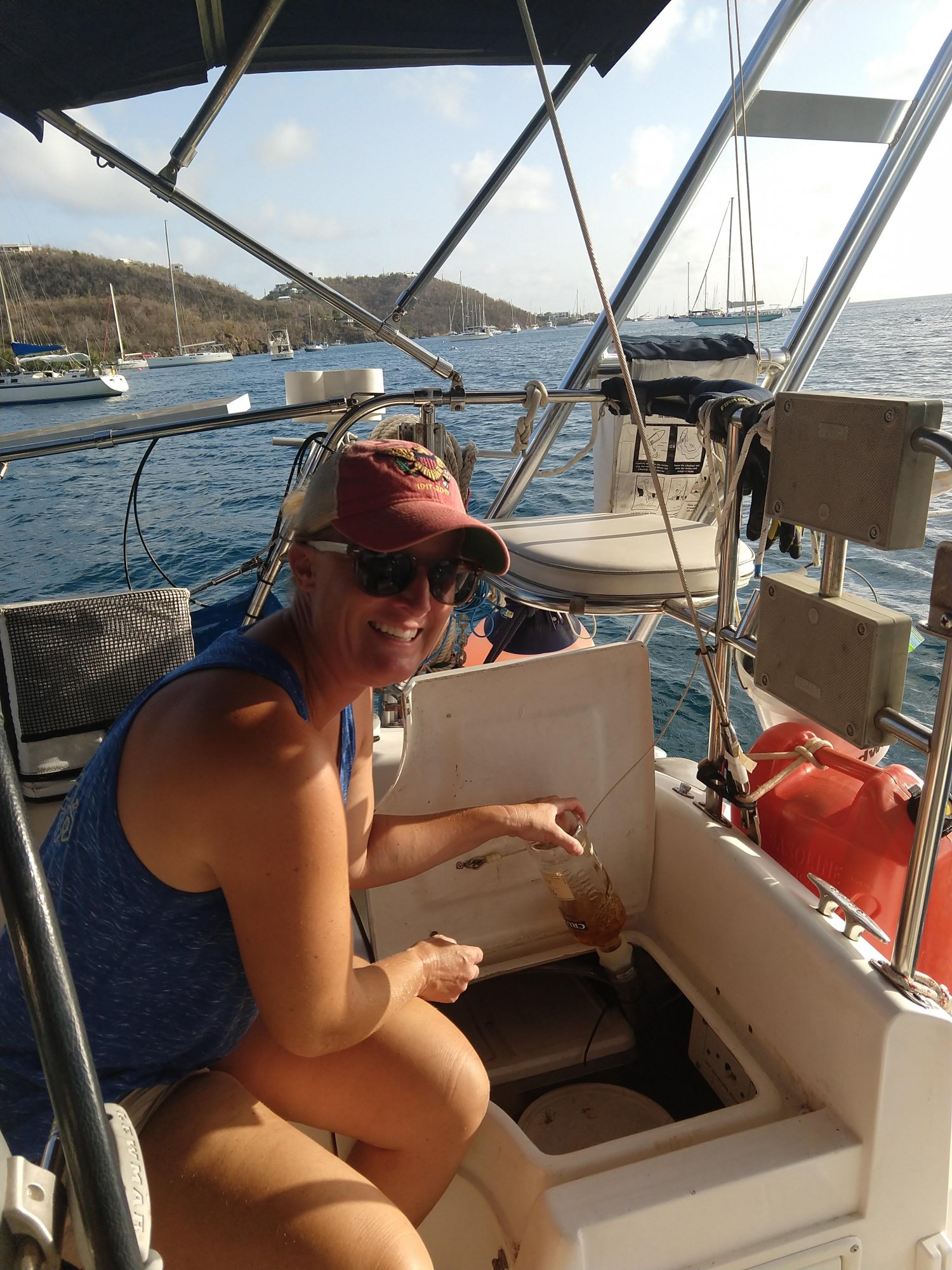 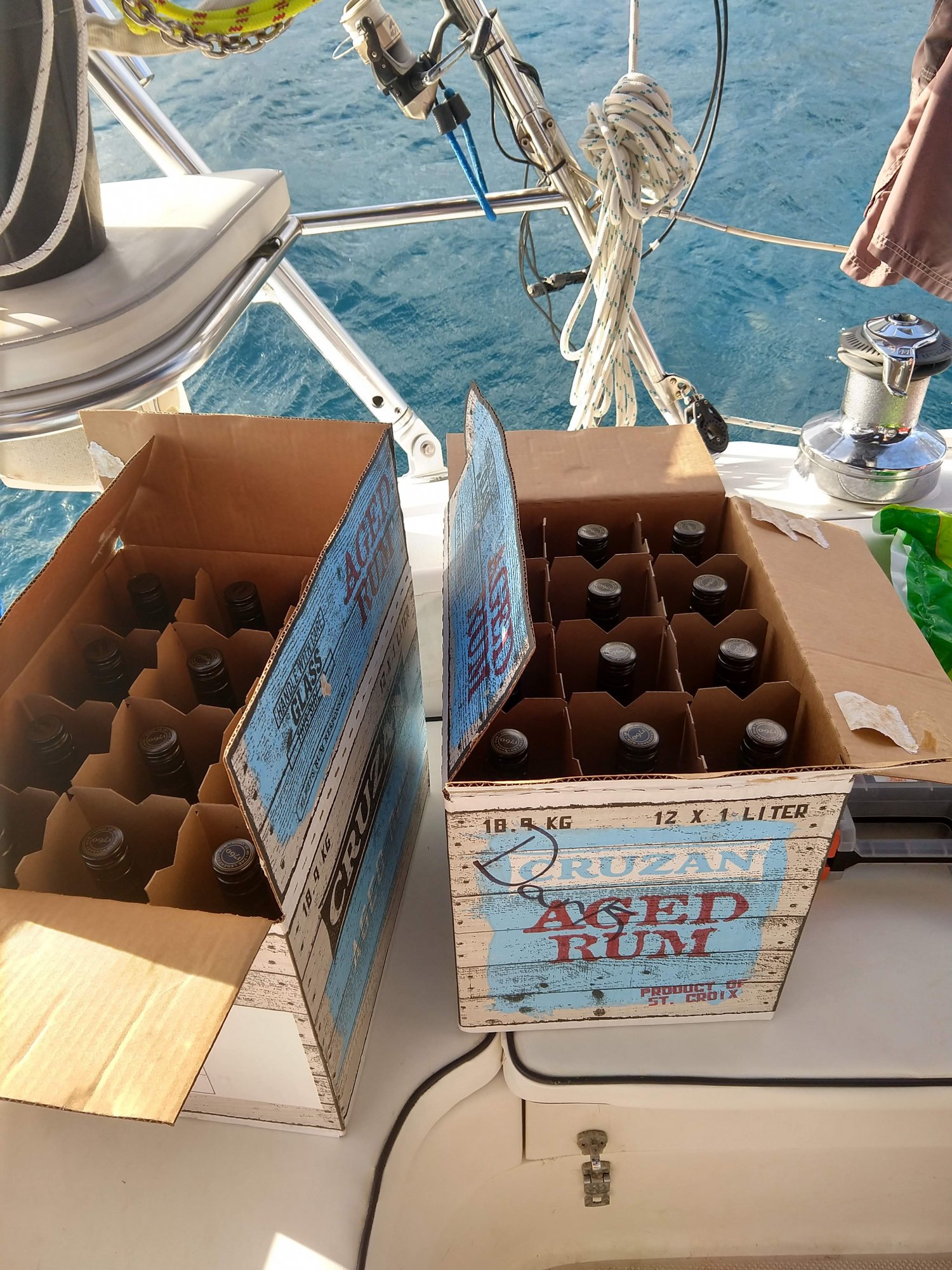 Now I will say that I want to install a tap at the sink labeled “RUM”. But my Bride is afraid we will drink more if it’s that easy. Probably rightly so. So instead we have a two plastic 1.75 liter bottles (one Mount Gay and one Captain Morgan. We fill the bottle from the tank and then keep them on the shelf behind the settee.

We left St. Thomas with just under two cases of Cruzan Dark Rum in the tank. It’s our go to rum and in the USVI you can get if for under $8 a liter.

Now if I could only find a deck fill labeled RUM I could really finish the installation.

Today I finished our new lifelines. As a quick disclaimer, we haven’t used side gates since the ICW, so this wouldn’t work for others. 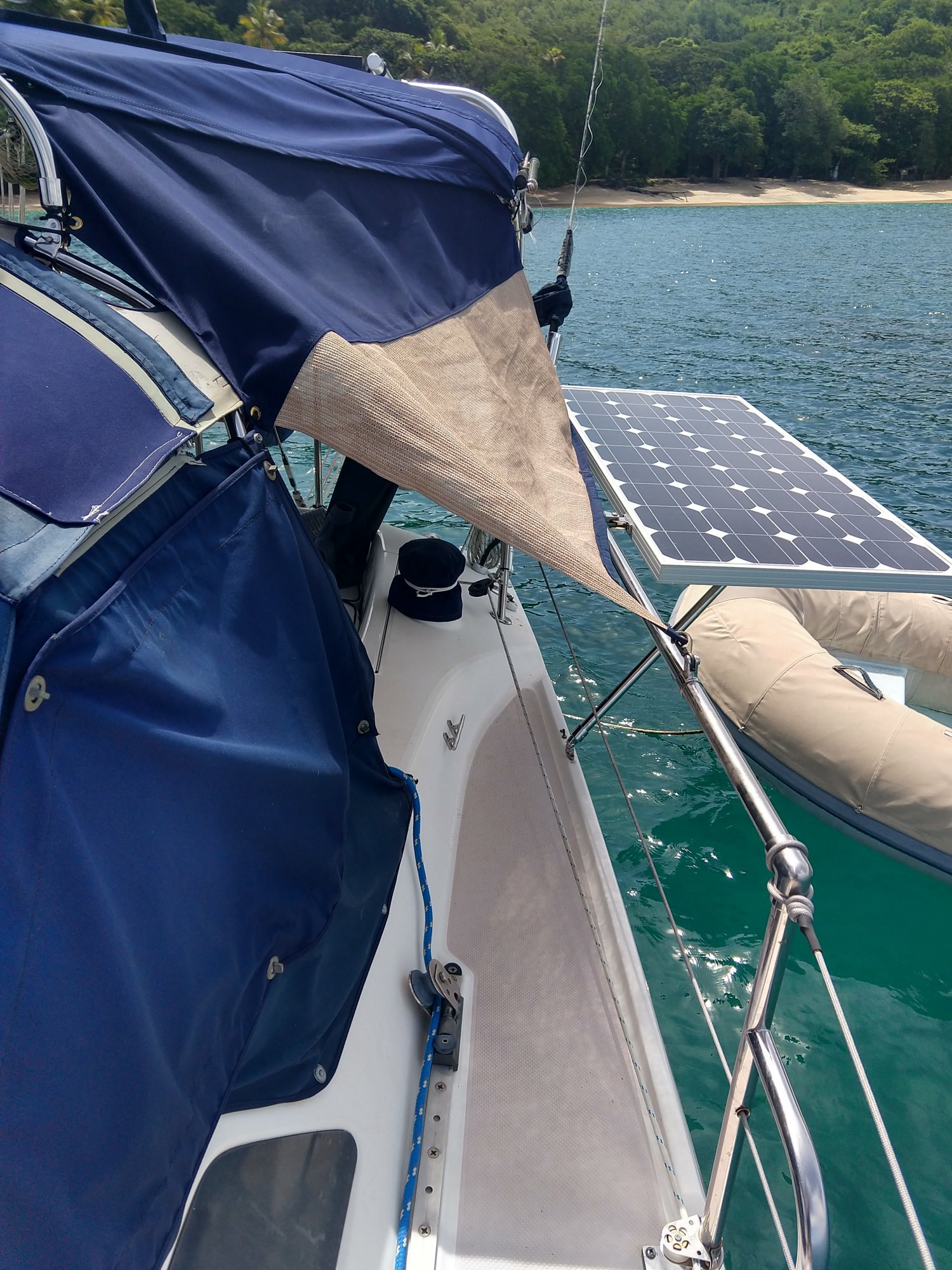 Our lifelines were the original coated steel wire. They had rust spots, saged, were unsafe and unsightly. We replaced the top gate with a solid bar to assist with solar mounting. These are schedule 80 stainless steel. The stern side are secured to the old welded attachment point with a split end connection. On the gate stanchion side it’s a 90 degree elbow. I had to remove the tube going through the stanchion for the lifeline to get the elbow to fit. All set screws are aggressively spotted and secured with red loctite. The spotting was the hardest part of the project, took 2+ drill bits. In addition I put two part thickened epoxy in each fitting prior to securing the set screws. 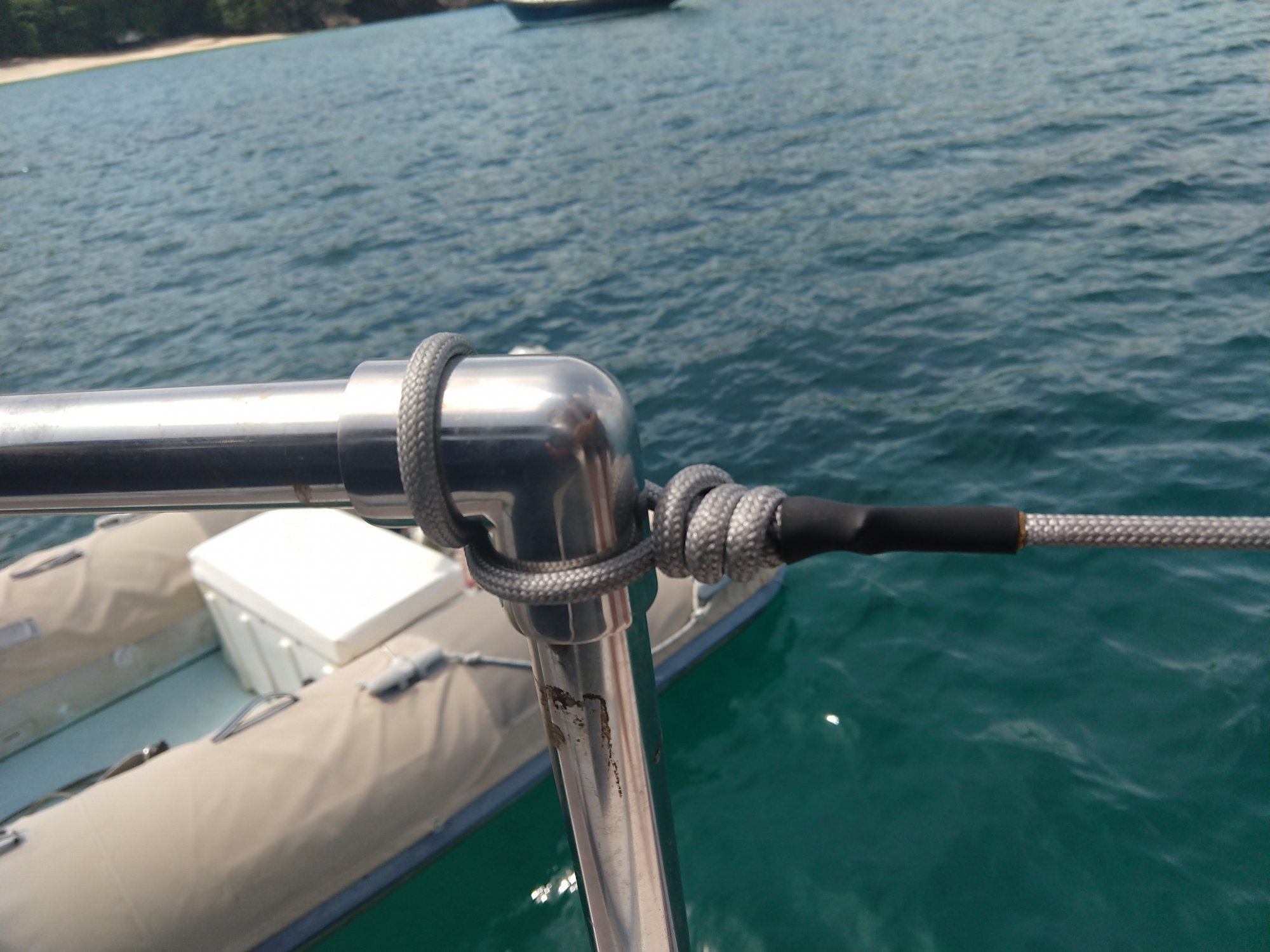 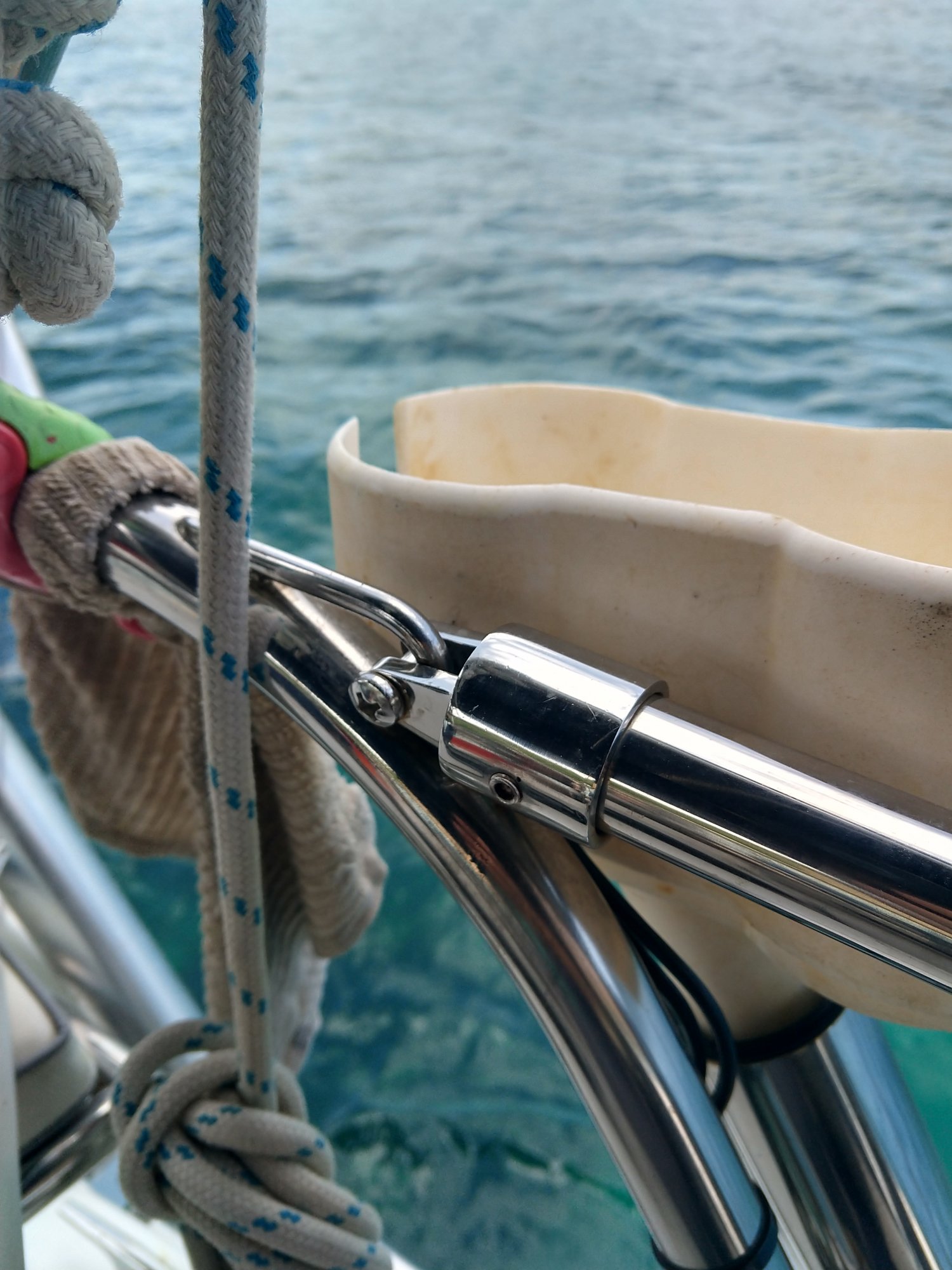 For the life lines I used 7mm New England Ropes STS-WR2. This is dynema with a double braided UV and chafe cover. It’s designed for wire replacement for things like lifelines and rigging. It is difficult to splice because of the bonding between the core and the cover. But, unlike straight dynema, it can hold a knot. So I used constrictor knots to attached the lines to hardware and to put thimbles in for lashing. I cleaned up the bitter end and used heat shrink to cleanup the look. 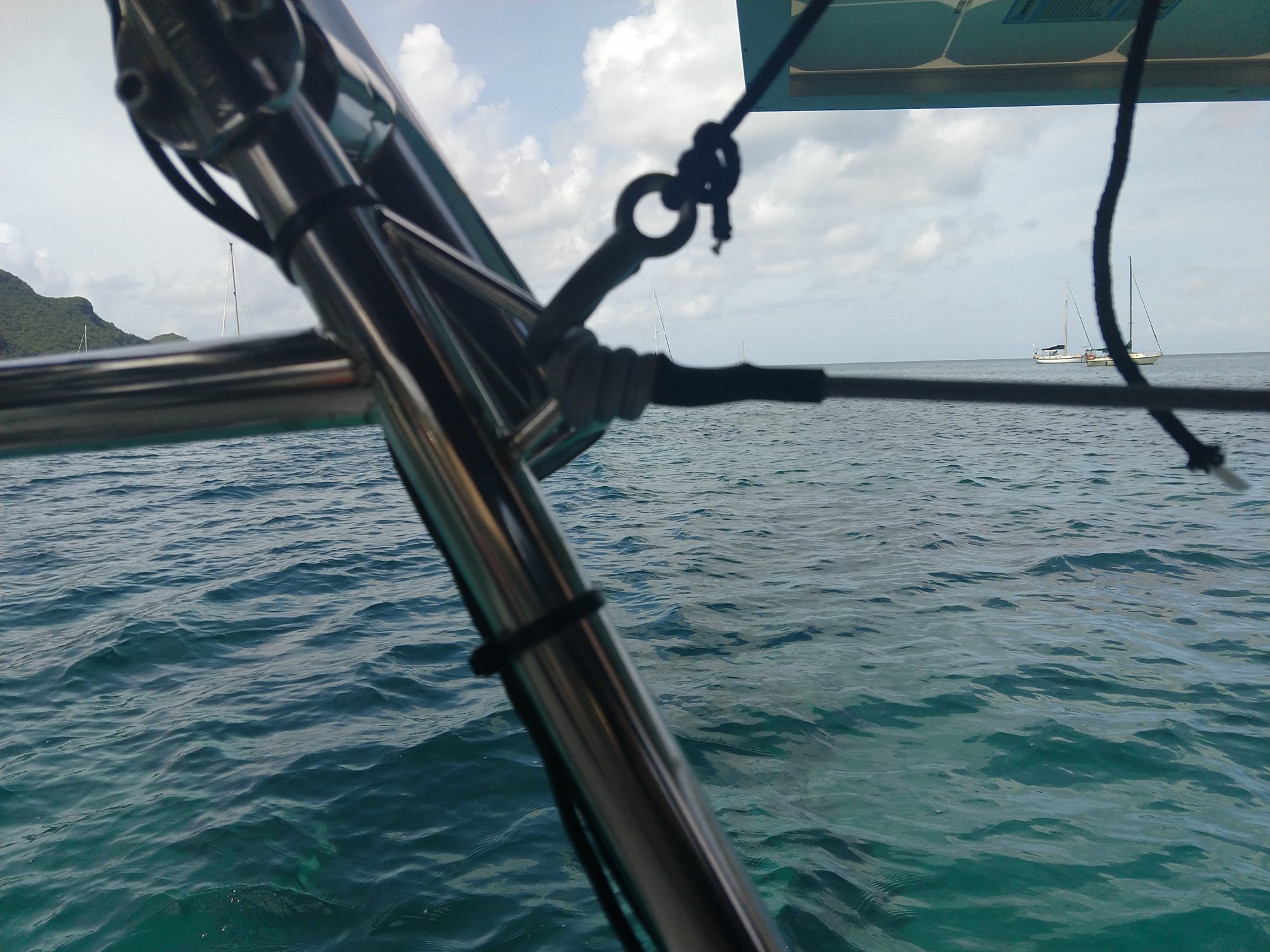 Then it was just a matter of pulling the lashings tight. The first try did have too much stretch and knot creep. But I retied shorter and was able to pull it tight enough that my Bride could stand on the lifelines with minimal deflection. 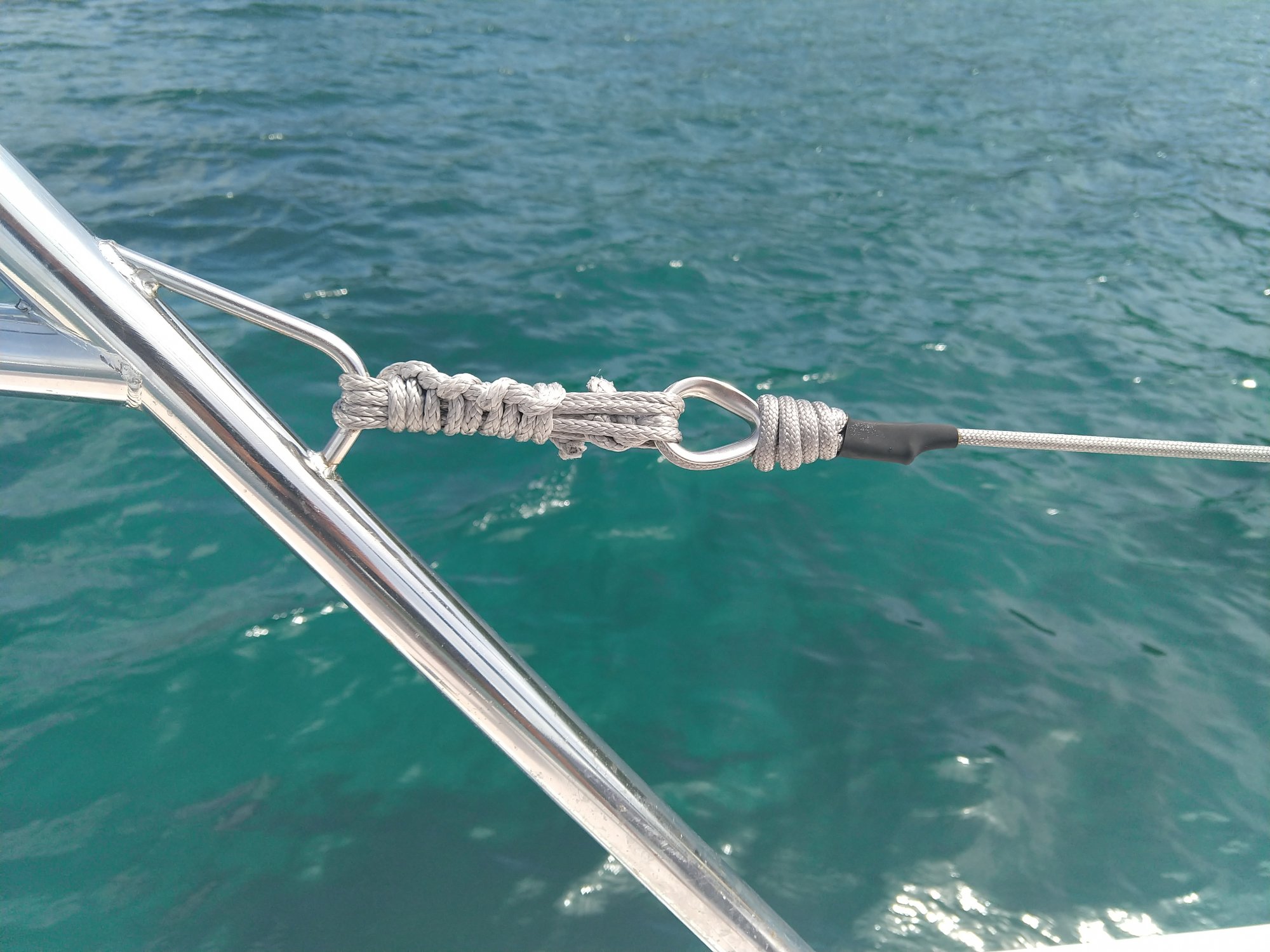 Unlike other dynema lifelines we have felt, the 7mm is thick enough to feel comfortable in the hand.

This project was completed in a day but we waited another two weeks to cut the bitter ends and do the heat shrink to see if there was anymore stretch.

Over the past couple years, while we were working to refill our cruising kitty by working in the Virgin Islands, we were also working to improve our boat to better fit the type of cruising we enjoy and to make her more seaworthy. During this time we even considered if we wanted to sell our beloved boat and get something larger. We looked at a couple of storm damaged boats from Irma and Maria but ultimately concluded we didn’t want to trade a cruising ready boat for a project that would require time and money that we could instead put into Smitty to make her better suited for us.

It will take us some time to get caught up on posts for all of these improvements while also posting about the places we are visiting. We won’t be putting them up in any particular order. If there is an improvement you are considering or want to know more about, please let us know. We will work on those first. We already have a request for the writeup on the stack pack conversion, so that one will be coming soon.