No we didn’t get rid of Smitty.  We love her too much for that.  But we did purchase a new inflatable.

We’ve been having ongoing inflatable issues ever since we have had one.  Our first inflatable, named Smitty Ditty by my Bride, was a 10-foot fiberglass RIB.  We got Smitty Ditty with the purchase of Smitty and that came with a 5 hp Nissan 4-stroke outboard. 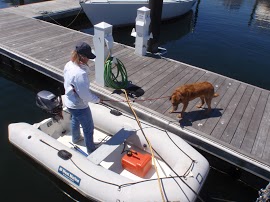 We very much had a love/hate relationship with Smitty Ditty.  It was our first inflatable.  And she did take us almost everywhere we wanted to go.  But she weighed about 140 pounds and was too big to fit on the bow inflated and not be in the way for the anchor locker.  She also leaked water no matter what I did.  I reglued her 3 different times with no luck.  She was also having a problem holding air and had two large (over a square foot) patches on the rear of each pontoon. 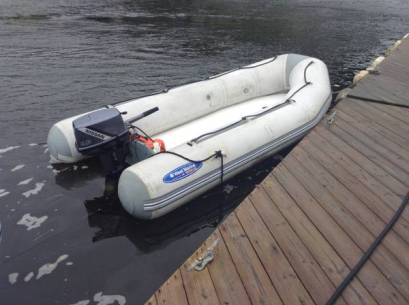 We purchased the Limo because we wanted the motor.  Our friend Stu has the Tohatsu version of this engine (Nissans and Tohatsus of this era are the same motors with different stickers and paint).  Our 5 hp 4-stroke weighs 54 pounds.  This 9.8 hp 2-stroke weighs 57 pounds.  Essentially we doubled our horse power for 3 pounds and the inconvenience of mixing gas. Done deal.  The motor just happened to come with a 11-foot inflatable rated for 1,545 pounds.  It was huge and you could easily put 6 adults and a dog in the boat.  You could have a large cooler in the middle of the boat and still sit people around the outside.  The party bus of dinghies.

The Limo came at a good time.  We put the new motor on Smitty Ditty for some test runs.  By the time we made it back to the dock it was apparent that the Ditty was no longer holding air.  I had just repatch one of the large patches on the back and the patch wasn’t taking.  In addition, the hull was now leaking water into the area between the two hulls so it now weighed close to 200 pounds.  We sold her to someone at the dock and used the Limo for the rest of last season.  The Limo isn’t bad, just big.  We lost close to 1.5 knots when towing it and there is no chance of having it on deck. It also has a soft bottom so beaching it to take Summer for a walk is dicey.

So this year we planned to make a big purchase, a new inflatable.  We didn’t want to mess around with used, patch inflatables for when we head out cruising because it will be our connection to land and all purpose vehicle.  We knew we wanted a hard bottom so that Summer could stand in it with no problems and we could beach it.  The length had to be 9.5 feet or less because that would fit on deck.  We also wanted it to weigh as little as possible so that putting it on deck wasn’t a big deal.  We also came to the conclusion that we wanted hypalon as opposed to PVC since PVC didn’t seem to last in the Caribbean sun.

After weighing all these options, an aluminum RIB was high on the list.  They are lighter than the fiberglass and more durable for beaching.  There are several that you can get in hypalon.  The only down side is the cost.  AB was the prime builder we liked with 9.5 foot aluminum ribs in single floor weighing 70 pounds and double floor with a  bow locker weighing 118 pounds.  But these come in with hefty price tags of $3,800 and $5,300, respectively.  Also, the AB aluminum hulls are painted white and the paint peels in the hot sun.  So now most people are getting the hulls bear aluminum and that can get hot on a sunny day.  I don’t wearing shoes and Summer doesn’t either (not that I ever tried).  We had a few fiberglass RIBs we were considering too that were less money but more weight.

Last September we saw the Highfields aluminum RIBs at the Newport Boat Show and thought they looked good.  So when we went to the New England Boat Show this weekend we sought out the Highfields along with any other RIB at the show.  After seeing the Highfields side by side with the others we were looking at we decided we really liked the boat.

We purchased the Highfield Classic 290.  It’s a 9.5-foot double floor model with a bow locker in ORCA, a type of hypalon.  The weight is 108 pounds.  We decided against the single floor ultra light models for two reasons: the single floor isn’t flat and could be difficult for us and the pup to get in and out of plus stand; I have read reviews from people with really light inflatables that say they feel less safe in high winds and chop due to low weight in the bow.  Highfields powder coats their aluminum hulls instead of painting them so they don’t have the same issue with flaking.  We got a good deal at $3,200 with a cover, under seat storage bag, pump, patch kit and dry bag.  It will be ready for us to pick it up in March.

Here are some photos of the 10-foot version they had at the show.

Transom support plus a bilge that reportedly will hold 10 gallons before your feet get wet.

Bow locker that you can lock with a pad lock unlike the AB.

No formal name yet but we (or should I say my Bride who gets to name the boat) are leaning towards Smitty Ditty II.

I can’t wait to add a few key features (fuel filter, drink holder, fishing rod holder, lights for night time dingy missions) and get it out on the water.  At 108 pounds our little 9.9 hp motor should get her up on plane no problem and move her along at a nice pace.

11 thoughts on “We Bought a Boat at the Boat Show”